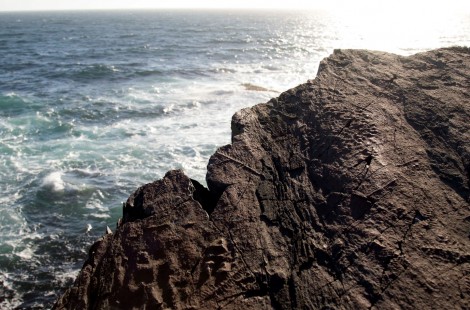 One of the most important and perplexing questions we face is why life on Earth suddenly became macroscopic after over three billion years of only microbial life. This innovation is captured in the fossil record by Ediacaran macrofossils, found 585-540 million years ago.  These Ediacaran organisms differ fundamentally from those found at other time periods, making it difficult to resolve their basic biology such as their phylogenetic relationships or their ecology.  My study, published this week in Nature Ecology and Evolution, uses quantitative analyses of three of the oldest largest Ediacaran communities from Mistaken Point, Newfoundland, Canada to test what advantages the largest Ediacaran organisms had over other, smaller specimens.

The in-situ preservation of thousands of these sessile organisms across hundreds of bedding planes provides a near-census record of these first macro-organism communities, enabling detailed statistical analyses to shed light on these first complex communities.  ​We used spatial analyses to detect interactions between different species.  I was particularly interested in determining when two species competed with each other for local resources because it is thought that that competition for water column resource drove the evolution of increased height for Ediacaran taxa, with increased size affording refuge from this competition, and leading to morphological innovations such as stems.  However, this hypothesis has not been tested.

In this study, we quantified the degree to which different taxa occupied different vertical strata of the water column, known as tiering, within three of the largest Ediacaran communities at Mistaken Point, Newfoundland, Canada, determined the extent to which resource competition occurred, then quantitatively assess what advantages Ediacaran species gained from increased height. Contrary to expectations, we found that resource competition was limited, that this competition did not significantly impact on community structure, and that morphological innovations such as stems provided advantages for increased dispersal, not for nutrient acquisition.

This work is part of my work as a Henslow Research Fellow, in Murray Edwards, where I am recording all of the Ediacaran communities from Charnwood Forest, UK and Newfoundland, Canada using a high-resolution laser, and then to using detailed statistical analyses of these data sets to assess the biology and ecology Ediacaran organisms.  I wish to reconstruct the original community ecology of these fossils – how they interacted with one another and with their environment – with an eye to understanding their role in bringing about the modern world.

and some of the scans can be found here

In remembrance of Dr Esther Goody