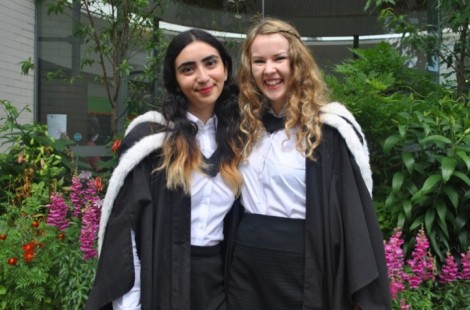 Reproduced from the Varsity Graduation Yearbook 2016, with kind permission of the University of Cambridge Development and Alumni Relations Office.

In October 2013, our time in Cambridge began in the brutalist haven of Murray Edwards. We matriculated in the same year that our College gained a new president, Dame Barbara Stocking. Before we lined up for our matriculation photo in the gardens, wearing our gowns for the first time and grinning into the camera, we heard an inspiring speech about the College’s importance as a space for empowering young women. As we all led out, more than one person mentioned the words: ‘girl power.’ The Spice Girls definitely would have been proud.

In a volume collecting the stories of the women of New Hall, our erstwhile name, the students were described as ‘independent minded, socially conscious, zany, witty…’ This still holds true today, as the students of Murray Edwards have thrown themselves into everything that Cambridge has to offer. We’ve been everywhere – producing news stories about the Cambridge bubble as a part of the TCS Medwards Mafia, or running around onstage (and backstage) at the ADC.

We’ve procrastinated by lurking on the College gardeners’ Instagram accounts and competed to be among the lucky few who managed to adopt an orphaned mini-cactus. We’ve Skived @ five all the way through Michaelmas and Lent, with Tea @ 3 remaining the shiny beacon of joy and custard creams during the depths of exam term gloom. In a true sign that shows the strength of our community, we’ve collectively mourned the closure of Aldi during our final exam term. Midan is there for us, but the days of cheap imitations of real brands are over.

Many of us were mildly terrorised by Jake the Cat. According to science (ok, the internet), cats leave dead animals for people they consider to be their family as an act of care. So really, all those dead mice left outside Pearl House was a sign of love from the cat that seemed to dislike most of us. Jake may not lurk in our corridors anymore or hide under our beds, but we sincerely hope he’s happier and healthier with his new family. I’m not crying, you’re crying. We’ve witnessed the rise and decline of Dome Life, which had all the cheese of Cindies but with the added bonus that it was taking part in our very own Dome. Our College’s bizarre symbol, the dolphin, was symbolised through the mysterious blue drinks that we all hated but drank anyway, evidenced in the bright blue tongues we sported the next day.

"The students of Murray Edwards have thrown themselves into everything that Cambridge has to offer. We’ve been everywhere – producing news stories about the Cambridge bubble as a part of the TCS Medwards Mafia, or running around onstage (and backstage) at the ADC."

Art is a big part of Murray Edwards life. We’ve been terrified of the artwork hanging in Pearl House and Old Block on our way back in from nights out. And during the daytime too, if we’re honest. (No one will ever forget the horror of coming home at night and glancing at the painting of a woman with her boob out, drowning a child. Ever.) But other than scaring us occasionally, having Europe’s largest collection of women’s art shows how amazing a space this College really is.

When this College was founded, women in Cambridge had only been able to have degrees for five years. Our College has women represented on the walls and allows us to walk (and run!) on the grass. Which other College would have a piñata saying ‘HETERONORMATIVITY’ hanging from the ceiling?

Our bops may have died a dramatic death (still better than PAV, let’s be honest here) but the spirit of #DomeLife lives on in all of us. As we graduate and blossom into the strong, independent women that Murray Edwards has inspired us to be, I know we will always remember: dome is home.