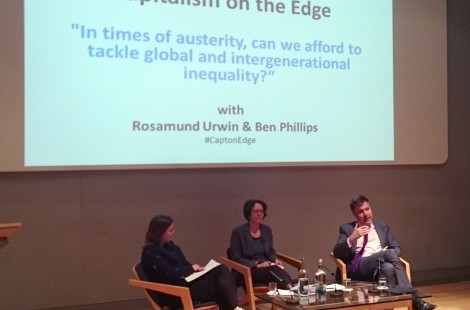 The fourth Capitalism on the Edge lecture hosted Ben Phillips from the charity ActionAid and Rosamund Urwin, a journalist for the London Evening Standard. As a representative from an NGO, Ben spoke on the issue of global inequality, highlighting what it is and why it is important, while Rosamund spoke from a British perspective on the inequalities facing young people in terms of jobs, financial security, and becoming a home-owner. The takeaway message from the evening is nicely summed up by a Louis Brandeis quote: "We may have democracy, or we may have wealth concentrated in the hands of a few, but we cannot have both."

The main discussion concerned the problems which occur when governments treat certain people unjustly, or when big businesses ignore the social and environmental damage caused by their greed. Both speakers persuasively argued that the unequal distribution of wealth and power is the primary driver of poverty, and significantly contributes to worsening conflict and climate change. For me, the discussion split itself into two questions: How can we use politics and campaigning to change the inequalities of the world, and how can we use capitalism itself as a tool for change?

The focus was mainly on the former question of the use of politics and campaigning. Persuading large companies and governments to use their powers responsibly is difficult. Ben argued that in countries which have less stable or democratic systems of government, organising and supporting campaigns is key. Rosamund put across a similar view: in countries such as Britain, young people must use their voice and vote for policies which improve their lives. We must speak out to stop unfair policies from being handed down to the generation with lowest voter turnout, whilst pensioners experience an increase in disposable income. Voter agency, she argued, is key to promoting intergenerational equality.

A highlight of the lecture dealt with the question of accountability and the need to hold those in power responsible for their actions; if we can make the big businesses who rely most on capitalism more accountable, we can make capitalism work better for more people. Ben shared a brilliant quote from a woman he had met in Brazil: "We made a mistake of thinking that when the good people are in power, we could stop pushing". The message was clear: If you want change, falling quiet is not an option, even when you have exercised your democratic right. Both Ben and Rosamund highlighted the importance of public pressure in holding those in power accountable, via social media or other platforms. Crucially, governments and those with disproportionate wealth must not be allowed to forget their responsibilities as global citizens.

With the evident support for and organisation around political change, the evening made me consider how we could complement these efforts with a push for change through capitalism itself. How do we encourage the poorest demographics to use capitalism to their advantage? How can we help groups of people to organise themselves into cooperatives, which collectively have more bargaining power? If there was a way to make grassroots capitalism and small business ventures attractive to lenders and investors, perhaps we could use the tools of capitalism, as well as those of politics, to empower those who are currently discriminated against.