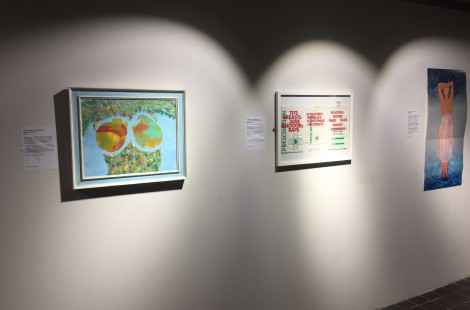 During February 2019, Murray Edwards College has been showing the Breast Cancer Art Exhibition, contributing to Pink Week at Cambridge University which aims to raise money and awareness for breast cancer research and care.

The New Hall Art Collection, the second largest collection of women’s art in the world with over 550 works, is housed at Murray Edwards College.  A group of its students felt that this would be an appropriate place and an appropriate way to capture the feelings of some women who themselves have had breast cancer and breast cancer treatment.

Miranda Nicholson, one of the organisers, and a third year History of Art student, explained that whilst there are plenty of statistics about the subject, it is difficult to capture the feelings, emotions and challenges, which arise on finding you have breast cancer, on deciding to have treatment or not and on reacting to the effect of treatment.  She felt that perhaps the power of art might express those emotions, enabling the viewer to share and understand. 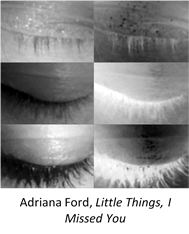 The organising group discovered that two artworks in the New Hall Art Collection are by cancer sufferers.

Kate Barton created Cultural Science (Blue) while she was coming to terms with a terminal illness. She applied white spirit to oil paints – through a series of random yet controlled artistic gestures. The patterns which emerged resemble a culture of cells. Both the creation of the work and the work’s appearance mimic chemical processes. Barton herself hoped that the painting would inspire ‘feelings of both impermanence and instability’, probably alluding to the fragility of her own body.

Jo Spence was an integral figure within photographic discourse from the 1970s, well known for her highly politicised approach to photography and the representation of her own struggles with cancer. Using her camera, for example in A Picture of Health, Helmet Shot, 1992, Spence challenged her body and her illness and found news ways of claiming her identity back.

The group worked also with Adriana Ford, 2017 founder of the Breast Cancer Art Project, to select some of the artworks for the exhibition. The Project is an online platform for anyone affected by Breast Cancer to express their experiences through art. It’s a place to tell stories, a place to heal.

Adriana’s piece, Little Things (I missed you), is a collage of three photos of her eyelashes growing back after chemotherapy, together with their negatives, which look like bright beams – representing her excitement at their return. She says, “Compared to a mastectomy, the loss of eyelashes is a little thing, but the fact that I photographed them is perhaps testament to their significance as my body recovering from the drugs.” 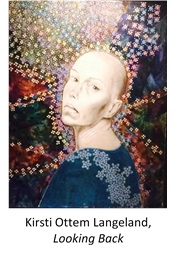 A dramatic portrait in the exhibition is of the Norwegian artists Kirsti Langeland who died in 2007 ten years after her first diagnosis. The picture painted during a period of remission after some gruelling treatments, perhaps reflects her hope for recovery.  It was loaned by David Hillbeck and Philippa Radley who live in Norwich.

How do you express your concern when faced with grave illness, especially if potentially terminal? We may resort to heartening language, being ‘strong and brave’, being ‘a fighter’  - war terminology, masculine terminology. These four pictures and the other 12 demonstrate differing but very sensitive, very personal responses to the actual reality of suffering from this disease which affects an essential part of being a woman.

Whilst the exhibition ends on 24 February, there are whispers of a hang at the Annual Breast Cancer Conference in Cambridge in July and a possibility that it will travel to other universities.

The artworks in the New Hall Art Collection are displayed throughout Murray Edwards College, in the Dining Hall, the Library, the corridors and can be visited on any day.

Ask at the Porter’s Lodge for a self guided tour; see the New Hall Art Collection website for more information.