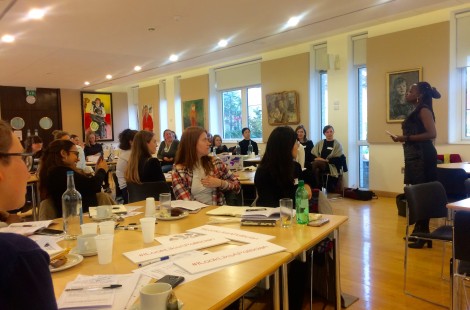 On 2 February 2019, Murray Edwards College hosted an inspirational workshop event called ‘Elect Her!’, designed to increase women’s participation in politics by training students in the skills needed to thrive in public life.

Around thirty Murray Edwards and Lucy Cavendish students took part in this workshop organised by the US-based Running Start organisation and led by Kristin Hughes. These students join the more than 15,000 young women who have already participated in ‘Elect Her!’ workshops at 118 universities across four different countries.

The event combined both practical advice on the skills needed to break down barriers to women’s political leadership as well as presentations by women role models.

In addition to learning about how to identify your issue, map out support networks, and deliver campaign speeches, students heard from three women who have exhibited political leadership at various levels.

Amika George, current first-year student at Murray Edwards, spoke about her experience leading a successful #FreePeriods campaign to fight period poverty. She encouraged students to speak unapologetically about periods – to anyone who will listen - in order to break the taboo and pressure representatives to provide free sanitary products in all schools.

Cheney Payne, alumna of Murray Edwards and current City Councillor, spoke about how she surprised herself by going from an ‘armchair politician’ to actually running for – and winning – a seat on City Council. She encouraged students to challenge themselves and step outside their comfort zone, even if it can seem terrifying at first.

Heidi Allen MP joined via Skype and explained how she transitioned from a long career in business to the halls of Parliament during this particularly volatile time in British politics. She told students to take initiative in tackling a problem that frustrates them and to not assume someone else will fix it!

Based on the very positive feedback from students this year, with nearly all participants saying they would recommend the workshop to a friend, we look forward to hosting this event next year.

Dr. Sophie Rosenberg, College Lecturer and Fellow in Politics comments: “Women make up half of the population but are widely underrepresented at every level of public life, from student politics to the highest levels of national government. It’s a particularly exciting time for women in politics today, with increasing numbers of women breaking into political leadership roles and more open discussion about the real challenges that block women from achieving full and equal participation in public life. The ‘Elect Her!’ workshop was an inspiring opportunity for Murray Edwards and Lucy Cavendish students to not only learn key skills but also to launch a conversation between students and women who currently hold leadership roles at various levels, from organising social activism on period poverty to improving life in Cambridge as a city councillor to representing Cambridgeshire residents in Parliament.”