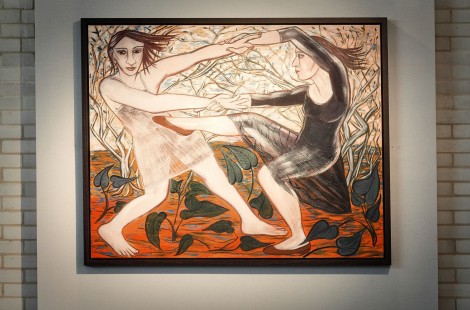 The business leader, Margaret Cole, and contemporary painter, Eileen Cooper, were warmly welcomed to the College as Honorary Fellows at an admission ceremony on Saturday 18 June.

Artist Eileen Cooper also donated her painting Perpetual Spring to the College and the work was unveiled in the Dome before the annual Benefactors' Feast took place that evening. She is was one of the original artists to donate a work (Seasick, which hangs in Fountain Court) to the New Hall Art Collection - the largest collection of women's art in Europe, which is based in the College.

Margaret Cole is an alumna of the College and matriculated in Law in 1979. She is currently on the Executive Board of PricewaterhouseCoopers.

Artist Eileen Cooper studied at Goldsmiths College from 1971-1974 and graduated from the Royal College of Art in 1977, where she studied painting under Peter de Francia. She rose to prominence as an artist in the 1980, being particularly well known for her strong and passionate figuration, and was elected a Royal Academician in 2000. In 2010, Eileen was elected as Keeper of the Royal Academy, the first female officer in the Academy’s history. In the recent Queen’s Birthday Honours, Eileen was awarded an OBE for services to the arts and arts education.

Sometimes described as a magic realist, Eileen brings an unapologetically female perspective to her subject-matter, which encompasses sexuality, motherhood, life and death.

Margaret Cole was a solicitor with over twenty years’ experience in private practice, specialising in commercial litigation with an emphasis on financial services. In 1990, she was a Partner at Stephenson Harwood where she was responsible for the recovery actions in relation to the Maxwell Pension Funds on behalf of the Pension Funds Trustee.  She joined the London Office of the international law firm White & Case to found and head its Dispute Resolution Department in 1995.