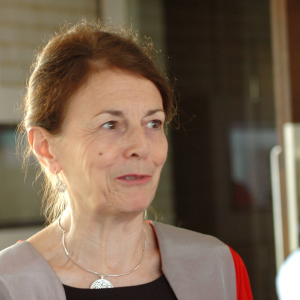 Professor Dame Jean Thomas is Professor Emeritus of Macromolecular Biochemistry at the University of Cambridge and former Fellow of New Hall.  Her research is on the structure of chromatin (the complex of proteins and DNA that constitutes chromosomes) and its role in the repression and activation of genes.

Professor Thomas is a Fellow of the Royal Society, the Academy of Medical Sciences and the Learned Society of Wales, and an elected Member of the European Molecular Biology Organisation and of the Academia Europaea.  She has served on many national scientific bodies including Research Councils and the Wellcome Trust (as a Governor), and was a Trustee of the British Museum for 10 years; she also served as Biological Secretary and Vice-President of the Royal Society 2008-2013.  She is currently President of the Royal Society of Biology, and a Trustee of the Wolfson Foundation.  She has served as Master of St Catharine's College, Cambridge.