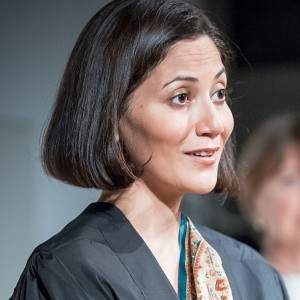 Mishal Husain studied Law at our College from 1992. She became an Honorary Fellow in 2015.

Mishal Husain was born in England in 1973, and grew up in the Middle East and the UK.  Her interest in journalism was piqued in 1991 while interning at a local English-language Pakistani daily, where she quickly rose to the level of reporter, covering stories in such countries as Pakistan, Russia, Uzbekistan and Georgia.  Fluent in Russian, she also taught English in Moscow during her stay in the former Soviet Republic.  By 1995, having graduated from Cambridge University with a degree in Law and an interest in international law and human rights, she entered the European University Institute in Florence, Italy and earned her Masters.

Beginning her career in television journalism, Husain went to work for Bloomberg Television. The grace with which she handled her on-air assignments caught the eye of the BBC, and led to her joining the network in 1998 as a producer.  Soon after, she transferred to the Economics and Business Unit, where she covered various topics relating to the business world.  Her first work as a news anchor came in May of 2000, when she hosted the Singapore-based BBC show Asia Business Report.  Moving back to London, she co-anchored World Business Report in 2001 with Patrick O'Connell, where her stellar reporting on the September 11th attacks earned her the anchoring gig at BBC World News that November, where she remained until the spring of 2004.

She works on BBC Radio 4’s Today Programme, presents news bulletins on BBC1, appears on BBC World News and was also the BBC’s first US Washington-based anchor.  Her worldwide reports have included: London 2012 Olympic Games, the Egyptian revolution violence of August 2013, and Pakistan; the deaths of Osama bin Laden and Benazir Bhutto.

Other BBC programmes include: Newsnight, From our Own Correspondent (BBC radio) and A History of the World in 100 Objects (BBC television).  Mishal’s critically acclaimed BBC documentaries include: Malala – Shot for Going to School, How Facebook Changed the World, and The life of Mahatma Gandhi.

In 2009 Mishal chaired the judging panel for the prestigious Orange Prize for New Writers. An ambassador for the charities Mosaic, Operation Smile and the British Asian Trust, Mishal was named by The Times newspaper as one of the five most influential Muslim women in the UK.