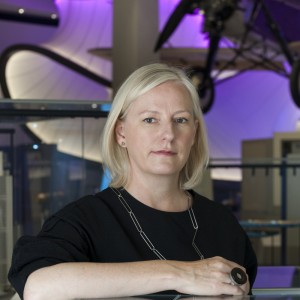 I am thrilled to have been invited to join the college community, and I’m looking forward very much to making new connections and to developing shared interests and collaborations with the New Hall Art Collection, the Fitzwilliam Museum, the University, and beyond.

The Arts and Crafts Movement in Britain and beyond, with a particular emphasis on the legacy of William Morris; the architect and designer C.F.A. Voysey; and the work of women artists, designers and makers.

Karen Livingstone joined the Fitzwilliam Museum in February 2021 as its first Deputy Director for Masterplan, Exhibitions and Major Display Projects. In this role she is responsible for the Museum’s ambitious redevelopment and Masterplan. The Fitzwilliam’s Masterplan aims to transform the building and displays to ensure the Museum functions as a great new social space for the region, an innovative cultural and research asset for the University of Cambridge and its great collections, and an even more extraordinary place to interact with art and history.

Previously, Karen joined the Science Museum Group in 2011 as its first Director of Masterplan and Estate. She planned and delivered Masterplans at each of the five museums in the group, most notably the Science Museum in London, which was declared a winner of the Art Fund Museum of the Year prize in 2020.

Karen began her career as a curator, first at Aberdeen Art Gallery and Museums and then the Victoria and Albert Museum. She curated the V&A’s landmark 2005 exhibition ‘International Arts and Crafts’ following which she became Head of Projects, where she built up a track record of directing and delivering multiple award-winning capital projects.

Karen maintains an active interest in curatorial collections and research, scholarship and publishing. Her interests include the Arts and Crafts Movement, art, architecture and design, and in particular work by women. She is on the judging panel for the annual Women in Architecture Awards and is currently working on a book about Women in the Arts and Crafts movement.