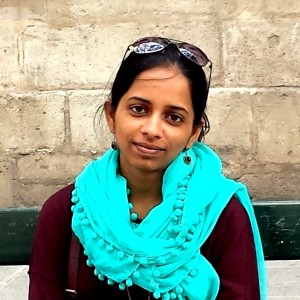 The abundance of warmth, energy, and inspiration within the college community (undergraduate students, fellows, and the college President) is unparalleled!

Harika Tankasala is a Bye Fellow at Murray Edwards College and a Research Associate in the Centre for Micromechanics at the Department of Engineering. She joined the Engineering Department in 2012 as a PhD student upon receiving a 3-year studentship under Prof. Norman Fleck, sponsored by the US Office of Naval Research. Her PhD (and current) research concerns with the fracture mechanics (and numerical modelling) of advanced material systems such as lattice networks, composite materials, multi-layered armour, and CNTs.  Since 2012, Harika has taught undergraduates in the Engineering Department, Part IIA course modules Mechanics of Solids, Fracture Mechanics, and Finite Element Methods. In Murray Edwards, she supervises for Part IA Structures and has also been a part of the interview panel for undergraduate admissions.

Outside of work, Harika teaches Science for Grade 7 and 8 pupils in a remote village in India twice a week via a digital classroom facilitated by an NGO called eVidyaloka. She also plays with the community samba band in Cambridge, Arco Iris.