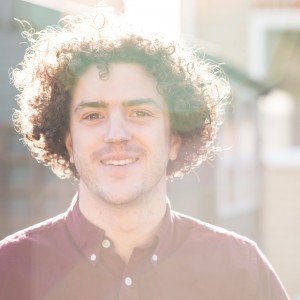 At Murray Edwards the austere Cambridge tradition of Choral Evensong is transformed into our inclusive and contemporary humanist happenings. The college’s outward looking musical offerings aim to explore a truly broad palette of musical genres and welcome participation from both inside and outside the college.

Ewan is a composer, conductor and curator. Often inspired by everyday phenomena, Ewan’s music features quotidian sounds such as the flutter of tiny wings in In the land of butterflies; the recitation of the creed in Requiem for Hollow Churches; or the honks of flying geese in his most recent orchestral work Frail Skies.

His cartographic scores explore a different, but also very direct relationship between music and the ‘real world’. Through an ongoing partnership with Ordnance Survey he has begun writing music directly onto existing maps ranging from London’s tube-map in London, he felt fairly certain, had always been London to a topographical map of the Glyndebourne countryside in Glynde.

Ewan directs the Wilderness Orchestra in performances of his orchestral arrangements of music by artists including Radiohead, David Bowie and Nina Simone, with soloists such as Charlotte Church, Kate Nash, Camille O'Sullivan, Jessie Ware, beatboxer Shlomo and actors Olivia Williams and Jack Whitehall.

Ewan is a keen collaborator with other artistic mediums and has worked extensively with choreographers, filmmakers, visual artists and theatre companies. In 2015 Ewan worked with the Dr K Sextet to found the Pierrot Project, which nurtured collaborations with musical and visual arts.

Ewan is an enthusiastic teacher and enjoys working with young people. As well as supervising students at Cambridge he mentors students of the Aldeburgh Young Musician scheme; delivers workshops for Cambridge Music Outreach department and judges the East Anglian Young Composer Competition.