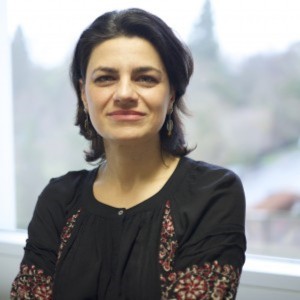 Fellow in Linguistics; Director of Studies

Murray Edwards understands the challenging complexities women face in today's world, an understanding underpinning its original and effective approach to women's education. The modern architecture and beautiful art underscore the College's innovative spirit and provide an inspiring setting for learning.

After a BA in Greek Philology at the University of Athens, I went to Edinburgh to obtain an MSc in Natural Language and Speech Processing and then a PhD in Linguistics. Before coming to Cambridge I worked at the Universities of Edinburgh and York and held an Intra-European Marie Curie Fellowship at the University of Lille III. I am one of the people who set up the Cambridge Bilingualism Network, a public engagement initiative promoting the linguistic and cognitive advantages of bilingualism and I am the founding Editor of Languages, Society and Policy. I joined Murray Edwards in 2016.  Since1 September 2022, I am Assistant Professor in First and Second Language Acquisition and Language Typology.

2001, Phonology competes with Syntax: experimental evidence for the interaction of word order and accent placement in the realisation of Information Structure, Cognition, 79.301-372 (with Frank Keller).

2007, Locality, Cyclicity and Resumption: at the interface between grammar and the human parser, Language, 83.1.110-160 (with Frank Keller).