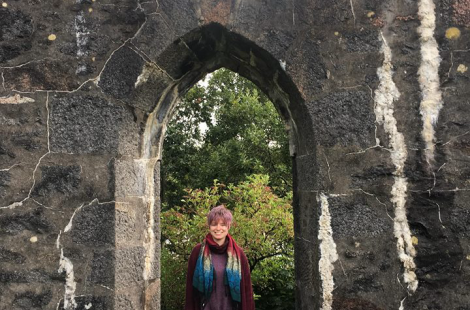 My trip to Oban, Scotland began with an unwelcome 5am start in order to make the flight to Glasgow. However the train ride from Glasgow to Oban was full of rugged mountains and idyllic lochs which more than made up for the early awakening. With its picturesque sea front and cute houses, Oban itself did not disappoint either.

Arriving at our hostel in the evening, my friend and I checked into our shared dorm with no trouble and then promptly went in search of food before having an early night.  The next morning was spent sea kayaking-or rather loch kayaking since the instructor, Andy, decided the wet and windy Scottish weather made the sea too rough. Wrapped in several layers of thermals and waterproofs, we ventured onto the loch feeling slightly wobbly and terrified about capsizing (all Andy had told us to do in such a scenario was to forward roll out of the kayak which did not reassure us a bit!), however  I soon felt more confident and thoroughly enjoyed myself. Andy attempted to teach us about tidal currents and windspeeds but we were more interested in seeing who could go faster. We were also lucky enough to see some seals and a porpoise. Around lunchtime we headed back to shore and helped Andy load the kayaks back into the van and then headed back to Oban. It was an awesome experience and I definitely hope to kayak more in the future. The afternoon was spent exploring Oban, including trekking up a hill to see McCaig’s Tower, a colosseum like structure that overlooks the sea.

Oban is a popular destination not only in its own right, but also as a gateway to the Hebridean islands so the next day, we took a ferry to the Isle of Mull and then to the Isle of Iona. Mull was beautiful but it was Iona that I really fell in love with. With a population of 300 in summer and half that in winter, Iona is tiny but idyllic, especially with the sun shining as it was when we visited. Not only is the scenery stunning, but Iona, as the place where Christianity first came to Britain, is also full of history. Me and my friend are history students so we loved exploring both the ruined nunnery and the restored Abbey on Iona.

We continued the historical trend into the third day by visiting the nearby Dunollie Museum and Castle, from which the Clan Chiefs and Lords of Lorn ruled large parts of Argyll for a 1,000 years. Even today it remains the seat and ancestral home Clan MacDougall. Despite the pouring rain, it was fun to look round the castle grounds and ruins and afterwards we enjoyed a delicious vegetable broth which warmed us up no trouble. Before we left the castle, we got to listen to some bagpiping which was loud and very Scottish! In the evening, we went to the bar attached to our hostel and took part in the pub quiz with a German couple we met. Sadly, we came last. We eased the sting of defeat with some wine.

On our last day we took a boat to a seal colony. The seal pups all looked very fat and adorable - I wanted to steal one. We were also lucky enough to see a rare white tipped sea eagle - Oban actually has one of the few nesting pairs - which was a great final note to our trip.

Overall, my first time travelling without my family was amazing, full of great experiences and lots of fun. In fact, there isn’t really anything I would change (apart from maybe coming last in the pub quiz) and I would definitely recommend a visit to Oban, although with a warning to pack warm clothes even in summer.