Capitalism on the Edge 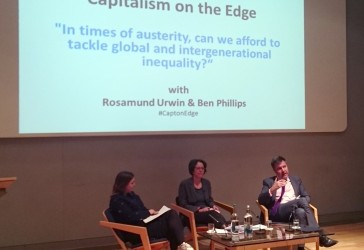 Capitalism on the Edge lecture with Ben Phillips and Rosamund Urwin

Capitalism on the Edge is a two-year lecture series at Murray Edwards College.

Can capitalism change enough to regain the acceptance and approval of the public? Lectures start at 5.15pm and finish at 6.30pm, followed by a drinks reception. Come and join us for the debate.

About the Capitalism on the Edge series

The level of public trust in the corporate sector is at a low ebb. From the banking crisis, to tax avoidance, to the horrific circumstances about companies of workers in the garment industry in developing countries, there are too many examples where the private sector has not operated in the interests of society, and where its reputation for moral behaviour is severely tarnished. So has capitalism run its course? Or can capitalism change to meet society's needs?

Paul Polman - Can you make capitalism useful for society?

On Monday 26 October 2015 we launched the lecture series with guest speaker, Paul Polman, Chief Executive of Unilever plc. Polman argued that capitalism can eradicate poverty and mitigate climate change within a generation if it evolves to embrace a longer term outlook, a stronger sense of purpose and more partnership.

David Pitt-Watson - What they do with our money: what is wrong with the financial system and how to fix it

On Thursday 19 November 2015, David Pitt-Watson from London Business School delivered the second lecture. He asked one simple question: What is the purpose of Capitalism? He himself makes a point of asking the question regularly because unless we are clear about what finance is for, it will do more harm than good.

On Thursday 28 January 2016, Frances O'Grady gave our third lecture. Frances is the first women to lead the Trade Union Congress (TUC) and she believes strongly that trade unions are essential to tackle income equality.

On Thursday 25 February 2016, Rosamund Urwin and Ben Phillips shared their views on how contemporary capitalism intersects with global and intergenerational inequalities. They discussed if capitalism drives inequality and the opportunities for change.

On Thursday 12 May 2016, Zoë Svendsen (Centre for Science and Policy) and Paul Mason (Channel 4 News) explored the relationship between capitalism, consumerism, theatre, and ethics, and where the future of both capitalism and theatre might lie.

On Wednesday 2 November 2016, Dr Rowan Williams (former Archbishop of Canterbury, current Master of Magdalene College) asked if Capitalism can be ethical, and how we could persuade the private sector to behave ethically in the poorest countries of the world.

On Thursday 1 December 2016,  Kate Pickett (University of York)  and Danny Dorling (University of Oxford) discussed what inequality means in the UK and other countries, what the implications are for the whole of society (including the rich) and what can be done to make societies in the world more equal.

Professor Emilios Avgouleas - From Speculative to Sustainable Finance: Can markets do good?

On Thursday 19 January 2017, Professor Emilios Avgouleas, University of Edinburgh, suggested that the public ordering of financial markets required a radical rethinking. In this context, he proposed a series of policy reforms to incentivise financial markets to move away from debilitating short-termism to supplying long-term (committed) finance for sustainable growth.

Panel discussion - What can women do to change how Capitalism works?

The Capitalism on the Edge lecture series is held at Murray Edwards College. For further information, please contact enquiries@murrayedwards.cam.ac.uk.